At times I wish this horse training stuff was magic like that.

Prior to losing his eye when he was 4, we had begun the basics of being ridden. I could take him to local shows with confidence that while he was far from even being “green” broke, he was safe to ride and would try his heart out.

But that all changed (or did it?) after he lost his eye. People often ask me if I noticed anything different. For the most part, I would say no, other than a bit of depth perception. But I was totally missing the anxiety signs – just sloughing them off as he can’t see on that side so his hearing was just more acute.

Then he became this miserable horse. He was hateful to ride. He would kick out at the slightest of leg. Go into a bucking fit – and let me tell you when he went up in the air, it was with power.

All along I said that I would do whatever it was that he wanted to do (except jump ?) – I didn’t have a specific goal in mind for what I wanted to do with him, I just wanted to ride my horse. After all, isn’t that all we ever dreamed of when we were growing up.

So I threw my pride in the corner and decided we were going back to groundwork. I had watched Danique transform her horse, and so I thought that that would be where I would start. I bought videos and began studying and putting what I was thinking that I was learning into practice. I was getting a visual result, but quickly learned that I wasn’t getting an internal result as he would still explode.

I found myself stumbling onto, and studying Warwick Schiller’s methods where he not only rewarded the horse for doing something right, but also worked to bring the horse up in anxiety – teaching them how to teach themselves to bring their anxiety back down. WOW! That was a big breakthrough.

I spent a couple of months just working on that. Didn’t ride my horse at all, just went all the way back to ground zero. When I did introduce riding again, it was in a halter. I couldn’t believe that I was taking this horse that wanted to be so miserable, be a bronc by times and just going to ride him in a halter, but I was willing to try anything. And it was great, once my heart got out of my throat. I began to build confidence in myself. But it still wasn’t just where I needed it to be quite yet.

And then along comes the Fall 2016 clinic with Jim Anderson – and the light shone down on us – angelic like. My horse needed a leader. He was getting that when I was on the ground, but when I got in the saddle, I wasn’t showing him that I was still the leader. Jim connected the dots for me as to how that groundwork moves to the saddle. While I knew the principal that it would, the art of actually performing the same exercise in the saddle as I had previously done on the ground wasn’t obvious, until it was.

Looking back, and seeing how he is in the pasture with his two mares, he’s happy to follow the leader. He’s always the third horse…except when something goes to hell, and then he’s like “see ya later girls, I’m outta here.” And he’s the first one to the barn. He needs a confident leader.

And so my riding changed with him. When I crawl into the saddle, I immediately am able to show him that I still got this – and he’s going to be in great hands. He is no longer that horse that kicked out with the slightest of leg pressure.

July 2017, I had the amazing opportunity to be in a small, intimate clinic with Andrea Anderson. And my world has changed again!!! We learned how to read the horse right down to the smallest of wrinkles identifying tension. It was profound to see the results while spending most of 4 days just walking backwards! And once you see it, you can’t un-see it.

A week later, I had my horse out and for the first time, I noticed his jowls were jiggling when working. I had never noticed that before – it was so obvious how he wasn’t clenching his teeth. On top of that, I have a horse who wants to be with me, he’s happy to hang out with me. Isn’t that what it’s all about?!

It turns out that I had that magic wand all along – I just needed to be open to how to use it. 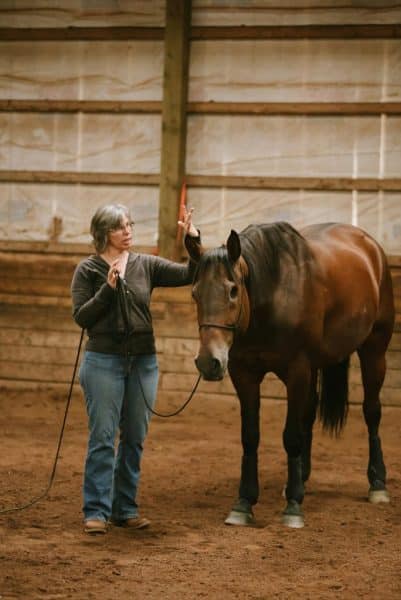